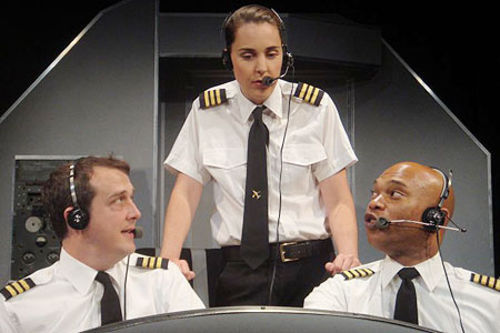 If France’s master post-structuralist filmmakers Jean-Marie Straub and Danièle Huillet had directed Flight, it might look something like this utterly unclassifiable whatsit screening in Sundance’s New Frontier section (devoted to works of the avant-garde). Originally produced onstage by New York’s Collective:Unconscious theater group, Charlie Victor Romeo consists of six dramatizations of real-life airline emergencies, performed on a spartan set by a small rep company of actors, using transcripts of the actual “black box” cockpit voice-recorder transmissions as the script. Now, CVR is a movie, albeit one shot—in 3-D, no less—during several live performances in front of an audience, the theatrical lighting and set design adding an eerie, disembodied feel to the harrowing struggle between man and machine transpiring before us. (The pièce de résistance: a beat-by-agonizing-beat reenactment of the United Airlines DC-10 that crashed into a Sioux City, Iowa, cornfield in 1989 after losing one of its engines.) For 80 minutes, the movie keeps you in something like suspended animation, waiting to exhale. All told, CVR might be more than some (most?) viewers can bear, but this much is for sure: You’ve never seen anything like it.

To read this article in it’s full version, please visit The Village Voice’s original article “The Movies to Know From Sundance — and the Year Ahead”