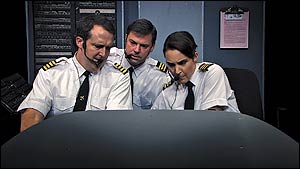 The adaptation of “Charlie Victor Romeo” will unspool in Sundance.

In the avalanche of world premieres and new titles announced for the 2013 Sundance Film Festival, it was easy for legiters to miss one they’d almost certainly recognize.That would be “Charlie Victor Romeo,” the film version — in stereoscopic 3D, no less — of the downtown stage hit that’s been around since its 1999 bow spawned a national tour, international incarnations and a handful of lauded return visits to Gotham.

The play’s film incarnation reps the first offering in an ambitious effort to bolster a recession-battered downtown arts org with a revenue stream flowing from a new cross-platform distribution network.

“By 2010, we had lost 90% of our foundation support and 72% of our total philanthropic support,” says Kevin Cunningham, exec artistic director of cross-media production company 3 Legged Dog, listed as an exec producer of the film alongside Patrick Daniels, one of the creators of “Charlie Victor.” “We realized that if we wanted to keep producing cutting-edge art, we were going to have to find another way.”

According to Cunningham, the move seemed a natural one for 3LD, which is dedicated to live performances that incorporate experimental multimedia elements and innovative tech. “Our work is inherently cross-platform, and our artists are all digitally adept,” he says.

3LD/3D+ is part of a growing trend among performing arts orgs aiming to exploit new-media content opportunities to bring in fresh coin and expose auds to work. The success of Wim Wenders’ 3D doc “Pina,” which danced to $3 million-plus at the domestic B.O., demonstrated that there’s a market for arthouse 3D, while high-def cinemacasts of theater, opera and dance have become staples of exhibitors’ alternative-content programming.

Originally created under the auspices of Gotham arts group Collective: Unconscious, “Charlie Victor Romeo” is an intense slice of docu-theater in which performers re-enact verbatim “black box” transcripts from the cockpits of airplanes in real-life emergencies. A complex, immersive sound design also contributes to the you-are-there re-creation.

The movie version — filmed over several performances this summer, with and without live audiences, at 3LD’s Financial District venue –is co-directed by Robert Berger, one of the original creators of the piece, and Karlyn Michelson. Both know the ins and outs of film production — Berger, for instance, has worked in post-production and been a cameraman for CNN — but neither had worked in 3D.

Berger says the duo had been hoping to make their own film of “Charlie Victor” ever since Hollywood types repeatedly offered them small change, and no creative control, for the rights to the title.

“The thing that really grabs people about the show is the way it puts the audience in close proximity to actors breathing life into these forensic documents,” he says. “To try to bring that to another medium, there’s this fear that a movie would flatten that.”

The residency with 3LD, and the 3D production opportunities it afforded them, helped solve that problem. For 3LD, the deal it gets from NHK allows the org to roll film production costs into an overall budget for a performance piece — typically between $150,000 to $450,000 per show, according to Cunningham.

It’s hoped the new distribution channels will help 3LD continue its financial upswing, going from a company with a current $1.5 million operating budget and a staff of seven, back up to pre-recession levels of $2 million- $2.5 million and an office of 11.

Pushing clips of content to mobile devices, as TenduTV has done, and offering titles on iTunes are a couple of possible routes to more revenue. But clearly the most viable option would be for a film to get into a film festival and then get picked up for theatrical distribution.

Not every 3LD/3D+ outing will get into Sundance, of course. Another title — a filmed version of 3LD’s production of Jim Findlay’s “Botanica” — didn’t make the cut.

Nonetheless, the initial attention from Sundance, where “Charlie Victor” will screen as part of the fest’s New Frontier programming, makes for a promising launch.

“The pond is getting smaller,” Cunningham says of the consistent decline of public arts funding. “So we needed to jump into a bigger pond.”