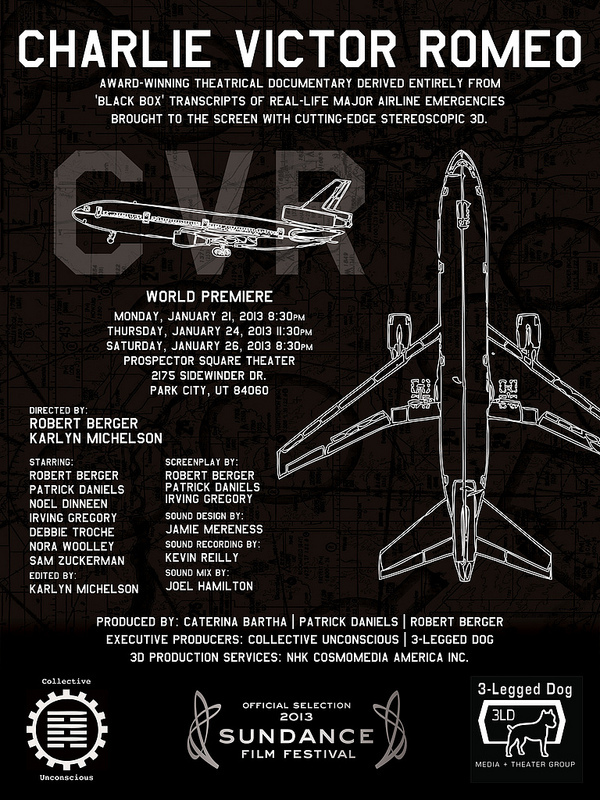 Interestingly, the film “Charlie Victor Romeo,” evolved from an award-winning play created in 1999 by Daniels, Berger and Gregory. The play captured two Drama Desk Awards for Outstanding Unique Theatrical Experience and Outstanding Sound Design and received recognition from Time Magazine in 2004 as Best Theatre Top Ten plays. The 1999 theatre version eventually was videotaped and the Smithsonian Aviation Museum reviewed it. Shortly thereafter, the aviation community picked it up and incorporated it into its repetoire of training tools for its pilots’ Crew Resource Management. After its 1999 opening at Collective:Unconscious in New York City, the played toured internationally and nationally until 2008.

The film version of  “Charlie Victor Romeo,” is a collaborative effort between Collective:Unconscious and 3LD Art & Technology Center. The production was filmed at 3LD Art & Technology Center as part of its new 3LD/3D+ program, a cross-platform for distribution and production of experimental work and made its West Coast premiere on Saturday, November 9th, at the AFI Filmfest 2013. Following the second viewing at the Filmfest on November 11th, the cast of Patrick Daniels, Irving Gregory, Noel Dinneen, Sam Zuckerman, Debbie Troche and Nora Woolley hosted a Q & A. Producer Catarina Bartha was also in the house to support her cast.

Berger, when asked what was the motivation behind the project, conveyed that it wasn’t anything political that it was simply trying to make something of interest to an audience.

In its most basic sense, “Charlie Victor Romeo,” dramatizes the human intensity that surfaces during the distressed descents of six airline crashes culled from dialogs taken from the surviving black box transcripts. In introducing the affected flights overlay schematics display the failed mechanical parts of the air crafts.

The team of screenwriters, Berger, Daniels and Gregory, scoured the typed transcripts of scores of airline emergencies and crashes, finally settling on the six presented. The criteria used in choosing which emergencies to dramatize the team wanted scenarios with enough emotional intensity that they could perform the scenes dramatically. They also wanted situations that illuminated the aviation perspective. And, finally, they wanted material that allowed their performances to create a bridge for the audience between professional aviation and their art in portraying  the human aspect of handling an aviation emergency while in inflight when things go horribly wrong. All the flights selected had issues due to mechanical failures.

“Charlie Victor Romeo,” creates a spell-binding, psychological thrilling techno experience within a tension-filled cockpit as the flight crews provide testament to the ability to live life to the very last second while deftly providing insight into who the people are that we entrust our lives to during airline flights and what they do when things go horribly wrong. Furthermore, the conscious decision to use 3D technology enabled the troupe to help bring the reality of being in the cockpit directly to the audience consciousness during the catastrophic experience as the pilots fight to save their passengers and themselves from an impending disaster.