Sundance 2013 Review: ‘Charlie Victor Romeo’ is One of the Scariest Movies You’ll Ever See 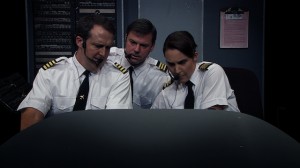 Sundance generally isn’t the film festival you turn to if you enjoy horror films, but Robert Berger and Karlyn Michelson’s Charlie Victor Romeo is one of the most terrifying movies I’ve seen, inside or outside the festival. It’s a filmed adaptation of a play that was first performed in 1999 utilizing actual transcripts of cockpit recordings from airline incidents as the script, with actors portraying the crew. The name itself comes from the NATO phonetic alphabet designation for cockpit voice recorder, or CVR.

The film plays out entirely in the cockpit of six different aircraft from several real accidents, with a very minimal set and actors playing the roles of pilot, co-pilot, and so on. It’s a fascinating and terrifying look at at a world most of us never see. Whenever you board a plane, you might get a fleeting glimpse at the banks of instruments, or perhaps the pilot will say “thank you” as you disembark, but what goes on in the cockpit remains a complete mystery to nearly all air travelers.

Which is the most terrifying element of this film. Charlie Victor Romeo shows us that these are human beings thrust into sudden life or death consequences, and unfortunately most of these incidents resulted in the loss of all passengers and crew. In the case of American Eagle Flight 4184, where a de-icing problem resulted in the plane rolling over and crashing into the ground while on a holding pattern outside Chicago’s O’Hare Airport, we see the pilot and first officer bantering lightly with each other and one of the flight attendants, and everything seems normal until all hell breaks loose. Second later, everyone aboard was dead.

Before each segment, a few slides with diagrams from the NTSB accident reports identify the type of plane along with some of the key components that contributed to the incident. At the termination of each flight, the screen smash-cuts to black and a slide comes up identifying the cause of the accident and list the number of survivors. It’s a stark and harsh testament to the loss of life.

Charlie Victor Romeo feels like a high-speed roller coaster ride. Many of these incidents play out over a long period of time, with the cockpit crew scrambling to regain control of their aircraft. The sound effects of the droning engines, the aural alarms from the flight computer (“Too Low! Terrain!”) and the whine of failing equipment all contribute to put you on the edge of your seat, making you feel like you are right there on the plane with them. The gentleman on my right in the theater kept breathing hard and gasping while white-knuckling his armrests. By the time the credits came up, I could identify with him and felt exhausted.

This is a minimalist film and definitely unconventional, even by Sundance standards. But it has been the most powerful film I’ve seen all week. It’s probably not something you’ll want to see just before you take a trip, as I’m already dreading my flight home, but this is a movie that will stay with you for a long time. It’s a very respectful and frightening look at what goes on behind those locked doors on the flight deck.

Upside: The sound design is flawless throughout the film, and even though you’re only seeing the cockpit, sometimes you feel like you’re right there on the plane.

Downside: I’m terrified to fly home now, and I haven’t been able to stop Googling airline “incidents” (because they don’t like to use the word “crash”).

On the Side: While the Denzel Washington movie Flight features a harrowing, but fictional, plane crash, United Flight 232 over Sioux City, Iowa, is much more terrifying, and is featured in this movie.