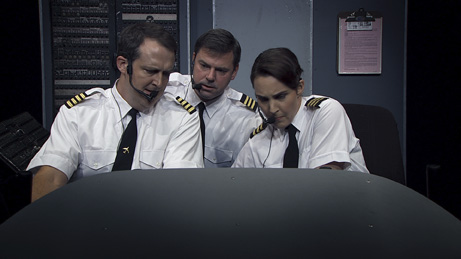 In recent years, the (over)use of 3-D technology in several of Hollywood’s biggest blockbusters has earned its share of detractors. Based on hit-or-miss box office trends, it seems that the public has generally succumbed to 3-D fatigue. With many big-budget films, the superfluous effects often carry the stench of studio gimmickry and a shameless moneymaking ploy. Its over-saturation is disheartening, but when used correctly and for the right kind of project, the 3-D viewing experience can be quite immersive and, in some instances, undeniably spectacular (Gravity, anyone?).

But 3-D does not have to be paired with ambitious CGI effects or candy-coated animation to be effective. Sometimes a simple staging of choreography (Pina) or an exploration of dimly lit cave dwellings (Cave of Forgotten Dreams), when coupled with the third dimension, can generate an engrossing connection between viewers and their onscreen subjects. With Charlie Victor Romeo, six taut vignettes take place in the same unadorned setting–a plane’s cockpit–with nary an angle change or an exterior shot. And yet, despite the dearth of breathtaking skyline backdrops, the film straightforwardly fosters an aura of apprehension and palm-sweating panic, induced by both its distressing real-life plane crash scenarios as well as its effectual and unvarnished use of 3-D.

The film, derived from a 1999 play developed by the New York-based, non-profit performing arts group Collective: Unconscious, contains dialogue lifted near-verbatim from transcripts recorded from six aviation accidents. A rotating cast takes on the roles of pilot, co-pilot, flight attendant, and other airline personnel in each segment. Their utterances of fear and resolve are captured by the cockpit voice recorder, nicknamed the “Charlie Victor Romeo,” and the anguish of these scenes is heightened by the fact that the actors are reciting the words from voices that, in many cases, will never be heard from again.

The simplicity of the cockpit’s staging is certainly indicative of a theatrical stage-to-screen conversion–we see the backside of the flight instruments and a door to the aircraft cabin, cloaked by a dark backdrop, while the actors are illuminated with flood lights. But with the implementation of 3-D photography, the fourth wall is more easily disregarded, and viewers are brought in closer to the verbal action. Particularly with some of the stronger vignettes, there are moments in which the foreboding dread of the circumstances feels so palpable it’s as if members of the audience have become passengers on the plane, awaiting their fate as the pilots strive to save our lives–and their own.

One segment in particular, Aeroperu flight 603, most successfully encapsulates the heart-pounding trepidation and escalation of suspense that the film aims for throughout. The pilot (Patrick Daniels, one of the co-directors) and an underused Debbie Troche as the first officer engender a sense of controlled dismay as their flight tools are rendered useless. Their performances as harried but strong-willed fighters, doing all that they can to save the 70 souls on board, serves as a reverent ode to the lives lost, as well as to those who survived.